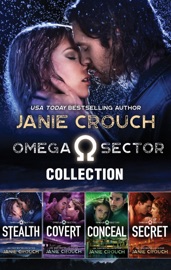 Omega Sector, an interagency task force, is made up of the country’s most elite agents. In these four classic tales by USA TODAY bestselling author Janie Crouch, they’ll be challenged like never before!

Stealth
The wrong place at the wrong time—that’s the only way Sophia Reardon could explain her predicament. She wasn’t even an FBI field agent and now she was being taken hostage. By her ex-boyfriend Cameron Branson. The moment Sophia walked into his undercover operation, Cameron warned her that his “employers” would want to break her. So keeping her by his side, pretending not to have feelings for her, was the best way to maintain his role in the dangerous organization, and the only way to keep them both safe. Because if they got their hands on her, she could expose him and his secrets. And then they’d no longer have any reason to keep her around…

Covert
At first it looked like a glorified babysitting job: safeguard a scientist while she created a countermeasure to neutralize a dangerous weapon that had fallen into the wrong hands. But when Dr. Megan Fuller’s life is threatened, undercover agent Sawyer Branson knows the enemy is closing in. Sticking by Megan 24/7 isn’t something he takes lightly, even if Megan doesn’t seem to appreciate his constant presence. But she soon becomes a challenge he enjoys. Because beneath her boxy lab coat and pinned-back hair lay a brilliant and beautiful warrior. One he’s determined to protect at all costs.

Conceal
As Bob and Lisa Sinclair, Omega Sector agents Evan Karcz and Juliet Branson were a formidable couple—until a brutal attack left Juliet traumatized. But with a powerful crime boss selling military secrets, the safety of millions depends on the undercover operatives. Evan’s strategy is to be near Juliet night and day to practice posing as a loving couple. But soon he realizes there’s a sizzling passion between them. With a killer stalking Lisa Sinclair, her “husband” knows he’d risk his cover—and his life—to protect her.

Secret
Former operative turned pilot Dylan Branson has one mission: deliver vital codes to Omega Sector before millions of lives are lost. Surprisingly, the codes reside in the photographic memory of Shelby Keelan, a beautiful computer expert who’s so far survived two murder attempts. Used to doing things solo, Dylan will get Shelby to Washington, DC, then walk away. So he’s stunned to discover she’s as much a loner as he is—and how much that appeals to him. Now, with both their lives in danger after his plane is sabotaged midair, Dylan no longer thinks of Shelby as just a job. Or that he’ll be able to let her go once it’s over. PDF Free