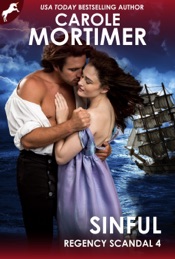 Having suffered through yet another Season without, at the age of one and twenty, becoming betrothed or engaged to any of the vacuous young fops of Society, Lady Olivia Buchan is sent to stay with her mother’s cousin and her husband on their island home for the summer months. After which, Olivia is to go and live quietly at the family’s country estate in the wilds of Yorkshire, well away from London Society, and any possibility of her unmarried status ruining her two younger sisters’ future chances of a betrothal and marriage.

What her mother couldn’t have known when she sent Olivia away is that three of His Majesty’s ships and their crews are currently visiting the island, at the behest of the Prince Regent, as his representatives during the island’s summer celebrations. Those ships are under the command of the tall and imposing Admiral Lord Magnus Forsythe, the Earl of Rockborne. A gentleman known to be a hero during the long years of sea battles against the French.

One look at this haughtily magnificent and the unmarried Rockborne and Olivia knows exactly why none of London’s pretentious young men have ever appealed to her. They could never compete with such mature and masculine perfection.

Unfortunately, Rockborne takes that same look at Olivia and thereafter attempts to avoid her company.

But Olivia, having seen the only man she could ever consider taking as her husband, will not be deterred so easily.

Not even when a scandal from Magnus’s past, involving her own family, is revealed.

Other books by Carole Mortimer